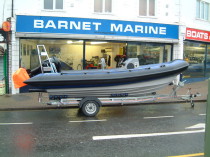 "Bottom of the Hill"

BARNET MARINE have been around a VERY LONG time, founded by Keith Chapman back in the mid 60's as part of his then "village shop"  It must have gone something like "a pint of milk and an outboard motor sir ?"

The story is that he had a village shop selling milk and the like.  He bought a Tent for a holiday, his wife used it once and vowed never to camp again.  "Sell it in the shop" so he did and quickly realised that more people wanted tents than milk....... Barnet Camping was born.   A while later he tried an inflatable boat on holiday, similar response  "Sell it in the shop" and Barnet Camping and Marine" was born.

Over the next 10 years Boats took over and we became a Limited Company in 1988   Barnet Marine Centre Limited.

We traded from the "bottom of the hill" (see above) in Barnet till 2005 when we moved to our current Welwyn Garden City address.  This coincided with Laurence Lock, who had joined in 1986, taking over from the Chapman family.  XS Ribs was founded in 2000 when it became apparent to Laurence that Tornado Ribs were going to withdraw from the UK Market.  This marked a change in the direction of Barnet Marine as they then properly moved in to boat building as well as retailing.

Over the years we have seen it all come and go, C Craft, Campari, Metzler, Ailsa Craig, Archimides Penta, Seagull, Dell Quay, Fletcher and alas Avon and Tornado.

Where we are now.

We have been in the inflatable and outboard business for more than 50 years and that helps when looking at "new stuff" as you have the history in your mind of what has been before.

Selling has moved online and we trade in this medium through our E BAY SHOP for all that we sell, outboard motors and boats through to key ring floats !

We also trade online through our ONLINE STORE, this website is JUST for the latest best prices on Outboard Motors and Inflatable Boats.

We are a leading manufacture of  RIGID HULLED INFLATABLES WITH THE XS BRAND.  This is a range of craft 3.6 - 9.9 m that we manufacture and distribute through out the world.

Where we are now.

XS have their own purpose built factory in East Yorkshire that they moved to in mid 2018, here they make the new boats and run a refitting and refurbishment service for older craft.

We welcome visitors to both sites, Welwyn is open all the time, see opening hours to the right, the XS factory is by appointment only.

Our Current line up of staff: 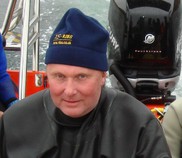 Laurence joined BMC in 1986 and has developed the Rib and online side of the business.  A keen diver and fisherman he uses all of the products BMC sells.

Sally keeps us all in check and oversees the accounts side of the business.

Neil has been with BMC longer than Laurence, his immense knowledge is used every day in running the engineering side of the business, servicing and new boat fit out.

Martin joined in 2006 and is the sales director, he also controls purchasing.  A keen diver he has first hand knowledge of the products we sell.

Adam works with Neil in our workshops, he has a long practical background in petrol engines and is skilled in the fitting out of our new craft.

Steve is self employed but if we deliver something to you with our own transport you are more than likely to meet Steve.  He has worked with us for more than 10 years.

Ollie is our newest member of staff and is based in Welwyn where he provides customer support as well as overseeing most despatches and online sales.

100's of things for sale,Outboards, Inflatables, Chandlery etc  IN OUR E Bay SHOP

Get a Quote to insure your boat, these are the best rates we have found in the market.